Music of the Spheres

Wow.  Today is my 34th birthday.  Kind of crazy.  It's like New Year's Day for my own personal life cycle.  Some cool "coincidences" have happened lately, one in particular is a book, a card and an idea.

One book that I reread recently talks about Pythagorys and the Harmony of the Spheres, his idea that each planet gives of a vibration (sound, but out of our range of hearing), and each planet harmonizes with the nearby planets.

Then, my sister got this new book, well, an old book, but new to us, titled, "The Secret Influence of Music Throughout The Ages" by Cyril Scott. 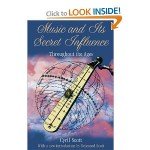 The cover art immediately caught my attention, as did the title.  In the intro to the book, Cyril's son explains how his father's whole mission in that incarnation of life was dedicated to advance the evolution of the human spirit.

Hmm, very cool.  My sister told me that when she was in the book store, that book jumped out at her and when she grabbed it a voice said to her, "I wrote this book."

Years ago if I had told you that my sister had a voice in her head tell her something she might be burned at the stake or thrown in an institute where they would use the latest technology to cut or electrocute out the troubled part of the brain.

Fortunately for all of us, times have changed.  I can talk about stuff that even 10 years ago people were still not open to.  You may think this is crazy, or you maybe can relate, or maybe you can't relate but are open to the idea.

Anyway, I believe a few things that play in to my interpretation of this event.  First, that we have blood lines, such as our parents, grandparents, great-grandparents, and on and on back to the start of our species. Then, I also believe that we have a spirit line, or "past lives".  Some of us have more than others but we are all part of the evolving consciousness that expresses itself through the individual.

For this particular lifetime, I feel that I have the tools, skills and experience to bring this knowledge to more people, the knowledge about who and what we really are.  To empower more of us to consciously create our own life experiences and to not become "victims" of circumstance.

For me, I feel strongly that I will do this by blogging (hence this blog), books, and very powerfully through music, using both the actual sound, rhythm and lyrical content to give people an actual experience as well as a mental context for seeing humanity in a new perspective.

If you follow my blog or newsletters you know that my newsletter has been lagging.  I wrote one months ago that I haven't released yet.  Thing about this whole project is that it is insanely personal.  And that was part of the point, was that I am not trying to be some far off up the mountain guru that has it all figured out and is preaching "THE Way."  Just some average person logging the way that I am doing it.  Maybe some of it sounds good to you, maybe some of it is completely not a way that vibes with you.  Either way, I try to keep it honest and try not to let the ego get involved.

But, when things are sucking, I don't want to add fuel (energy) to it by posting it here for the world to see, and second, sometimes its stuff that I am still going through and it is just plain scary to share.

So, the 4 year anniversary of my mom's passing was 2 days ago.  I didn't even realize it until that night.  Sometimes I get sad that my son never got to meet her.  But that's a sidetrack.  Ok, so while I was saying goodnight to Elena, while thinkning about my mom, I decided to choose a card from one of Elena's deck of cards called "Universal Wisdom Oracle" by Toni Carmine Salerno.  It has nice art on one side, and a little book that goes along with it to describe what the card means.

I quited my mind and asked for direction in selecting a card that would guide me and then I chose a card without looking.  I chose a card called, "Music of The Spheres."!  No joke!

Well, that was a good start!  So I opened the book and it said something to the effect of,

"Music heals the soul, transcending culture and ideology and bridging the gap so often created by conflicting beliefs…An ancient knowledge exists within you that is beyond verbal description and can only be accessed through the power of sound.  It will help you to raise your vibration and enable you to discover your hidden talents…Your prayers have been heard and answered.  You are about to enter a period of intense spiritual change through which you will rediscover and embrace the many aspects of your nature that have lain dormant for some time…You will become a source of wisdom and inspiration for many who will cross your path simply because of the energy and vibration you hold.  The new energy you are bout to access will come simply as a deep inner knowing bringing new perspectives to your life.  In the future, you may wish to use this energy to help others access the same vibration and knowledge within them."

I cut out some of it, but you get the idea.  Anyway, there is some stuff that is generic and applies to probably most people, but I gotta say, overall it was pretty awesome timing and content.

That's it for today, gotta go pick up one of my sound systems for a wedding I'm doing this weekend and another next weekend.  Take care and thanks for reading! –Winston